Meanwhile, my brain is incapable of stringing together sentences having just finished going through 280 some odd pages of angst, mayhem, and horror. So today’s blog is going to be rather chaotic and probably slightly all over the place. Bear with me.

I’m obsessed with gothic horror right now. Not necessarily unusual. I did my degree in 18th century English literature with a focus on the gothic novel. Add being a former goth on top of that, and it all slots nicely into place. So no surprise there.

I’d sort of lost touch with my previous fascination with that genre, focusing more on fantasy and urban paranormal stuff in the last couple of years. That was my mindset when I’d started writing The Shining Ones series way back in 2010. I wasn’t so much caught up in the sublime or my novel’s setting being a character in itself or mad monks and falling down castles. I was more interested in mythos. More interested in building my own angel mythology from scratch based on two points of interest: Neil’s take on Lucifer Morningstar in the Sandman series and one of my favorite songs of all time, “For Her Light” by a band that still has a very special place in my heart, The Fields of the Nephilim.

But more recently, there has been a resurgence in gothic horror that is taking me back to that genre. Have a look at Del Toro’s trailer for Crimson Peak.

Yeah exactly. I got shivers watching it the first time. Tom Hiddleston and creepy haunted houses. I’m in. PJ Harvey doing Nick Cave? Could it get any better? I was already heading in that direction, but Del Toro’s ability to make beautiful, ethereal things just pushed my mind into creative overdrive.

And if that wasn’t enough, I also just got done reading this, Jack Thorn by Katherine Harbour. 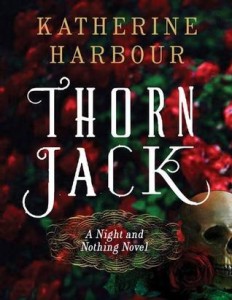 I don’t normally get book envy – it takes a lot for me  to go there – but I was absolutely impressed with her book to the point where I was like, “No seventeen year old should know that much about celtic mythology and be able to weave it into an enticing story that doesn’t read like a history lesson.” It even caused me to stalk her on Twitter. If you haven’t read it, do so. I could probably write a whole blog post on her setting descriptions alone. Very nice stuff. You can also be like me and follow her on Twitter if you’re so inclined. Just go here.

So here’s my second bit to this blog post that I want to bring to the party:

I predict that 2015-16 will see a huge uptick in gothic/steampunk literature, movies, etc.

It’ll be a bit like what Twilight was to vampires and paranormal romance or The Hunger Games and the slew of dystopian novels that followed. It’s coming our way. (ed note – Gothic is different from Steampunk for those who want to be pedantic about it; there is a nuance between the two, but for argument’s sake, I’m going to lump them together.)

If you don’t believe me, take a look at Madonna’s new video that came out two days ago and try not to dry heave. I couldn’t. In fact, I got really really mad to the point that my husband laughed at me. If I could’ve reached through my monitor and bitch-slapped Madonna for yet again more shitty music AND ripping off yet another subculture’s much-loved and respected identity for her own piece of tripe I would’ve. Does she have no shame?

Seriously. Enough already, Madge. Go retire into that good night and leave the rest of us alone. If the Steampunkers wanted to light you on fire, I’d gladly hand them the matches.

Sorry. Did I just say that out loud?

I could list several more examples of why I think this trend is going to continue, but I just realized that I’ve just done a smack down on Madonna so I’ll stop while I’m ahead. I’m pretty tired.

If you can think of any other examples to share, let me know, and I’ll put them up here.