I’m a day early on a blog post. I know, like anyone has any time to read anything so close to the holidays, but this thought has been stuck in my brain all week and I had to write about it somewhere.

So here it is:

It’s funny how real life can crop up in your writing. What I mean by that is that no writer is an island onto himself. Everything we experience, everything that moves us – both good and bad – has an effect on what we send out into the world in our books. I know that we all write the little blurb in the front of our novels that say “blah, blah, blah, purely fictional, blah, blah, not based on real people,” and that’s mostly true, but not 100%.

I had my own art-imitates-life-then-life-imitates-art moment this week.

I’ve been having a hell of a time getting the last couple of chapters of Protector finished this week. Nevermind that I have an editor deadline for January 7th. Oh no, I’m gonna be having some late nights between now and then. That aside, I experienced the same thing with Watcher so it’s not a new feeling. There’s something paralyzing and terrifying about tying up the loose ends into a pretty package (ed.- gratuitous holiday reference). I mean you’ve got almost 400 pages in and now all eyes are on you as resolve all the angst, the tensions, and of course, the murders. Plus for me, there’s always that chapter or two that happens right before the big reveal that has gaps – I mean seriously big holes where you think, “Where’s the plot to fill that?”

And so that sends me into a spiral of panic. For the most part.

But you know what? It’s also a magical moment. Some of the biggest “Uh uh, you didn’t!” moments came at the end of Watcher, which ties back into my original thought about real life.

At the end of Watcher, I was seriously addicted to Dr. Who, specifically the The Doctor and Rose timeline. That whole “Bad Wolf Bay” thing nearly killed me. I literally had tears in my eyes with that good bye scene. There have been few times that I have emoted in such a strong way to fiction. Even now, I think I was a wee bit silly with Dr. Who, but if I go back and re-watch it, I still get that feeling. It takes a lot for me to buy in, but when I do, I buy in big.

So as I enter the last phases of Protector, I find myself once again addicted to yet another televisual experience – this time in the guise of Sons of Anarchy. 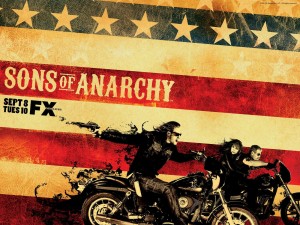 Oh yes. Man, I am seriously hooked on this crazy show.

Bear with me for a minute here as I digress . . . I have a deep love for everything Russell T Davies. Not that Russell has anything to actually do with the SOA, but when I found out that little ol’ Geordie Charlie Hunnam was playing a biker boy in a US drama for FX, my intrigued was piqued. Any Brit or gay man for that matter will remember Charlie playing Nathan, a coming of age gay adolescent in Davies’ Queer as Folk. (Hell, I can’t get the images of his gay sex scene out of my head ever.) So how does a quintessential gay icon become a burly extremely heterosexual biker gangster?

Easier than you imagine for a Brit star who’s been trying to break out in the US. Wow. 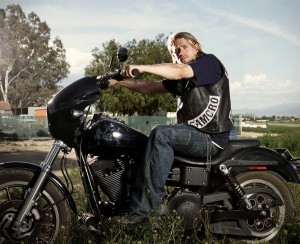 Anyhow, the point is that I’m finding it having an influence on the ending of Protector. Just like Dr. Who did on the end of Watcher. All of a sudden plot holes are starting to fill, things are clicking into place, and I have a new love for men with facial hair, tattoos, and big Harleys. Thank you SOA for the inspiration.