The year is 1994. It’s a cold cloudy day and you’re standing with your friends in a queue that can only be described as “epic”. Your friend, Bob, has been holding a place for you on Shaftesbury Avenue for some time because he’s at uni and students can do things like that. You stand in line with your friends, you smoke a cigarette or two and curse your decision for wearing your long purple velvet skirt. At the time it seemed sexy – now it just seems silly. Still, it helps keep the wind out and it’s nice to be the only one in line not completely in black.

You stand and stand and stand a bit more and then you notice that the line is starting to shift. You think to yourself, “Hurrah! It’s about bloody time, otherwise, I’m going to require more than fags to keep me warm.” You are vaguely tempted to bugger off down the street to the nearest pub, but you’ve waited and it’d be a shame not to meet the man. I mean, he is the man, right? He wrote a whole comic that sort of changed your history – the least you can do is give him an extra ten minutes.

It’s finally time and you’re ushered into Forbidden Planet along with every other goth, nerd, art fan boy, and socially awkward creature waiting to see Neil and Dave (Did I mention Dave McKean? Yeah, it’s like a trifecta minus one.) You don’t stop to look, you don’t shop for the new Hellblazer and you certainly don’t dawdle over Nightmare Before Christmas figurines. No, you focus on what you’re going to say. You focus on what you can say to the man in order to get him to sign your jacket. You know you’ve already been told that he’s under a “time pressure”, but damn it, you’re determined and hell, you’re a girl, right? What the hell is the point of being a goth girl if you can’t use it to your advantage?

Still, you’re shocked when he says “yes”. And you’re even more shocked when he asks you to jump up on the counter in front of a store full of people. It’s at this point that you swear an oath under your breath about the god damn purple skirt, but luckily your boyfriend is there to help hoist you up.

You try not to faint from embarrassment as everyone ogles you with a resentful eye. You are hogging up the man’s time don’t-you-know, but you try to look anywhere but at the crowd. Seconds tick by then minutes and you can’t figure out what’s taking him so long. You look to your friend and she gasps. You want to ask what’s wrong, but you don’t. Did he forget how to spell his name? Did he spell it wrong and cross it out?

Now to put it in perspective, this is a vintage leather jacket from Camden market that’s already got three painted panels that you’ve worked so hard on. You can’t throw this jacket away and start again. No, you’ll have to live with whatever the mistake is and be done with it. After all, you are living in a hovel of a flat with no money. The jacket cost you at least 30 quid even in Camden.

You jump off the counter and the man reminds you to hold still until the ink dries. He gives you a secret smile and before you know it, your moment is over. You find yourself ushered out of the building onto the sidewalk trying desperately not to ripple the leather of your jacket, which means you appear to walk like a zombie.

Five minutes later, after a bunch of oohing and aahing from your friends, you get to see what Neil has left for you . . . a perfect rendition of Dream aka the Sandman. 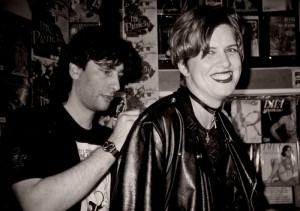 That was me back in 1994. Young, impressionable, straight out of university with no job or at least with no job that required a degree in English Literature.

That was then and this is now. 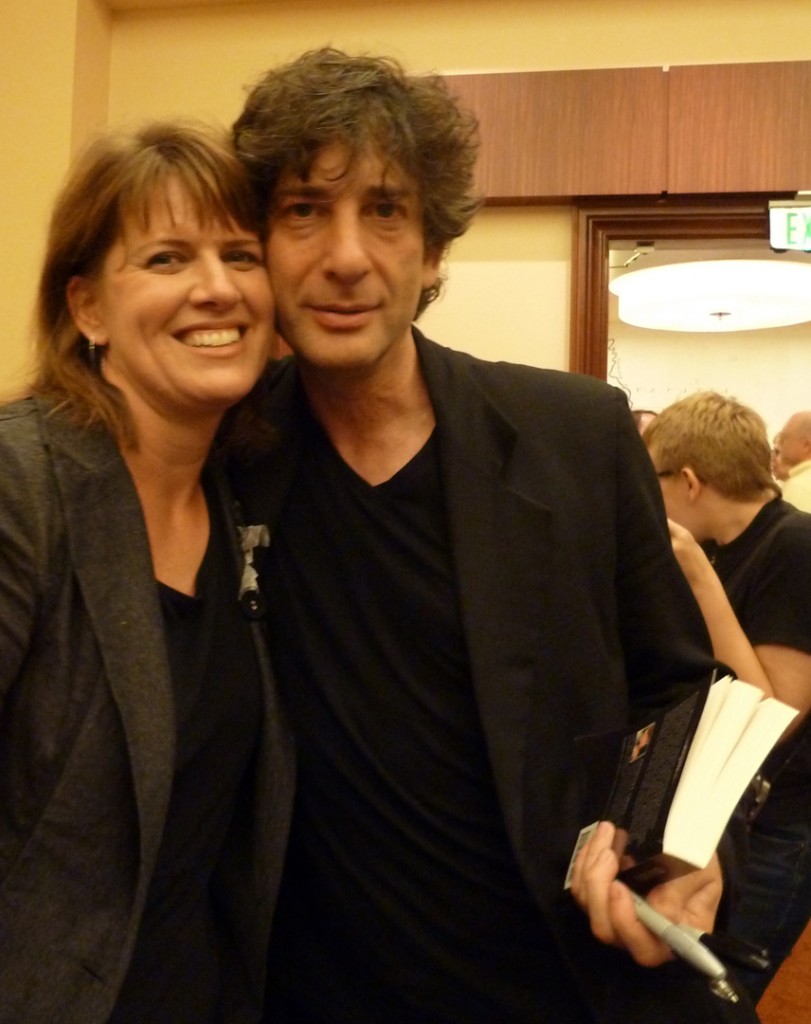 Not alot has changed in that time. Yes, the hair is a little longer, maybe a little bit of weight has been gained, and there’s the odd streak of grey here and there. The black is still there for both of us, of course. Unlike Neil, I’ve had several career changes since then. I’m now an author myself, which somehow seems poetic when I look back at the younger me. And Neil is still Neil, which pleases me to no end.

So where to go from here?

Well, I gave Neil a copy of Watcher, which was kinda like giving a candy bar to a god. Sweet, but potentially tasteless to someone who’s had only the best altar offerings. It’s hard to compete with that, but I had to do it. Even if he never reads it (I feel slightly nauseous if he does read it) Neil’s part of why I’m an author. If it hadn’t been for The Sandman and that fated drawing so many years ago, Watcher might’ve never existed. The whole Shining Ones series would be obsolete.

So thank you, Neil, for being an inspiration and an utterly lovely human being. And congratulations on your award. You’re still my idol after all these years . . .